The Proper Tuxedo Look – what is correct and classic 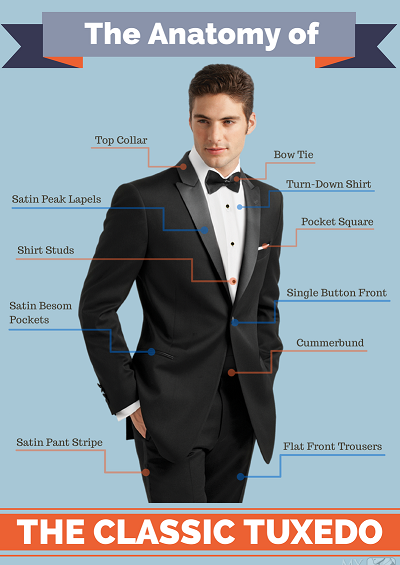 When it comes to formal wear a gentleman should know how to properly dress himself. There are a few choices to choose from but the correct presentation is only achieved by staying true to the classic tuxedo look.  However on occassion things we once considered classic are tampered with and changed so much that we forget what the original looked like. Unfortunately we have seen this happen with tuxedos. In an attempt to express one’s individuality many have strayed from the traditional and introduced color, patterns, and flamboyancy to what was always intended to be a conservative and formal look. The beauty in the look of a tuxedo clad gentleman is in the proper fit and simplicity of his ensemble. Unlike the ladies, who cringe at the idea of two of the same gowns being at the same event, we men should recognize that if we are all wearing similar attire then it isensem not about being different but about knowing how to properly dress oneself.  As illustrated above and discussed below you will find the proper and more classic choices one should select from when dressing for formal occasions.

The dinner jacket is the foundation of the black-tie ensemble.  The model, style and facings chosen for the jacket set the tone for the formality and swank of the remaining attire. The original and most formal model of dinner jacket is the single-breasted model.  Unlike regular suits it has only one button which allows the front to be cut in a deep “V” shape that mimics the ideal male torso.  Because the single-breasted model is often worn unbuttoned it requires that the trousers’ exposed waistband be covered by a cummerbund or waistcoat.  The double-breasted model became accepted as an informal alternative to the single-breasted in the 1930s and is now considered equally correct.  This model looks better buttoned when the wearer is standing so there is no need for any sort of waist covering.  This type of jacket traditionally has four buttons and fastens with either the bottom row (known as 4-on-1 style) or both rows (4-on-2) depending on the cut. The peaked lapel and shawl collar are equally authentic and correct.   The peaked lapel is derived from the tailcoat and for that reason it is considered the more formal of the two styles.  The upward and outward sweep of this style also serve to emphasize height and shoulder width.  The shawl collar, on the other hand, is considered less formal and conveys a softer image than its angular counterpart.  Although the notched lapel is by far the most popular style today.  It was not until the late 1970s that etiquette and style experts began to consider it to be correct for formal attire and even then its acceptance was limited. 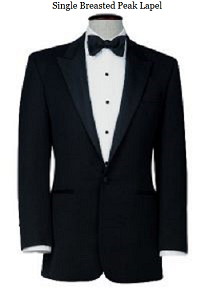 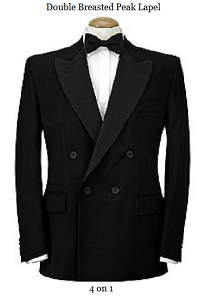 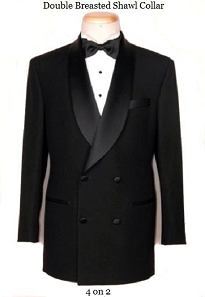 The original dinner jackets were made without vents then later offered with side vents. While side vents provide easier access to trouser pockets and are more comfortable to sit in, they can also make the jacket less slimming and somewhat compromise the intended formality of the tuxedo. The center (aka single) vent is unacceptable because it opens up when a man reaches into his trouser pockets thus exposing the seat of his pants and often a white patch of shirt to boot.  Despite its inappropriateness, the single vent is becoming more common on dinner jackets as mainstream manufacturers save money by patterning their tuxedos on standard suit styles. The double-besomed jetted (slit) hip pocket is the only style understated enough to complement the dressy dinner jacket.  Flap pockets are not appropriate for formal attire’s refined minimalism. The jacket’s sleeves should be finished with four buttons with their edges touching.  While black is the norm, midnight blue is also a classic.  This extremely dark hue of navy blue achieved its popularity in the 1930s due to its ability to retain its richness under artificial light whereas black fabric is generally more reflective and can sometimes give off a greenish or grayish cast, particularly if the cloth is not brand new.  For this reason midnight blue is frequently described as being “blacker than black” although “richer than black” would be a more accurate definition. One of the most distinctive traits of a tuxedo jacket is the decorative covering on the lapels known as facing.  This not only provides a jacket with an elegant flair but also emphasizes the “V” effect created by peaked lapels.  The best facings are made of pure silk, while less expensive ones contain a synthetic component.  The silk can take the form of smooth satin or the dulled ribbed texture of grosgrain.  Be aware that the facing chosen for the lapels will determine the type of material used for the bow tie and cummerbund and possibly the waistcoat.

Black-tie trousers are made of the same fabric as the jacket.  The waistband is meant to be covered either by a cummerbund, waistcoat or closed double-breasted jacket so it is essential that it sits high enough to remain hidden throughout the evening.  Belts are out of the question as they add bulk to the waistline and will invariably become exposed as the trouser waist gradually creeps downwards. A trimmed waistband is a relatively recent invention designed to replace the cummerbund but its inability to cover the shirt’s waist makes it a poor substitute. The side seams of formal trousers are also covered.  They are concealed by a single band of facing that is either satin or grosgrain to match the jacket’s lapels.  This elegant detail also serves to emphasize the suit’s vertical lines thus enhancing the wearer’s height. The formal trousers minimalism is rounded out by strategically placed side pockets and the absence of cuffs.  Side pockets are usually cut on the trousers’ side seam making them virtually invisible and more easily accessible, particularly when wearing a cummerbund or waistcoat.  Trouser legs are always plain because cuffs are too casual and would interfere with the side facing. The absence or presence of pleats is a matter of comfort and personal preference and does not impact a dinner suit’s formality. 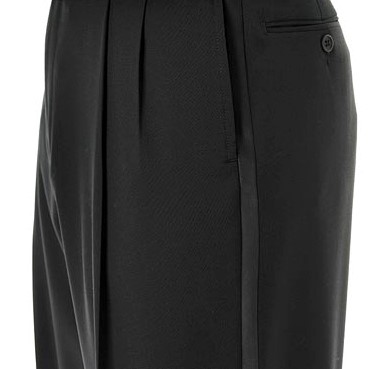 At RICARDO you can count on our sound advice when choosing your next formal wear attire. Whether you have a perfectly fitting tuxedo custom made for you, select from our offerings of ready to wear tux’s or are in need of accessories such as shirts, bow ties, cummerbunds, waistcoats, studs and cufflinks… you can be assured that with us you will end up with The Proper Tuxedo Look. 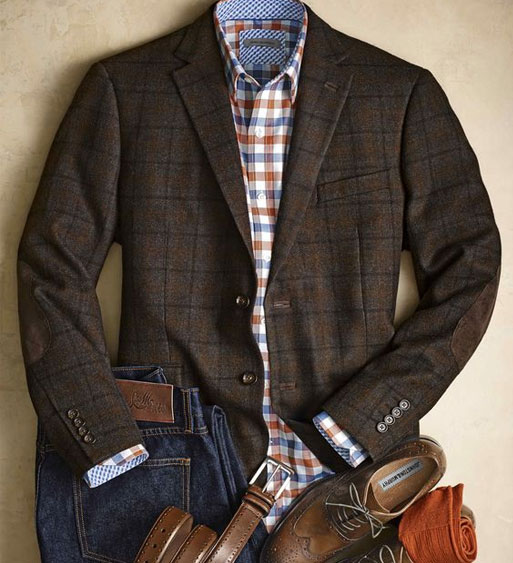 Ready to Wear
THE BEST IN DRESS AND CASUAL CLOTHING 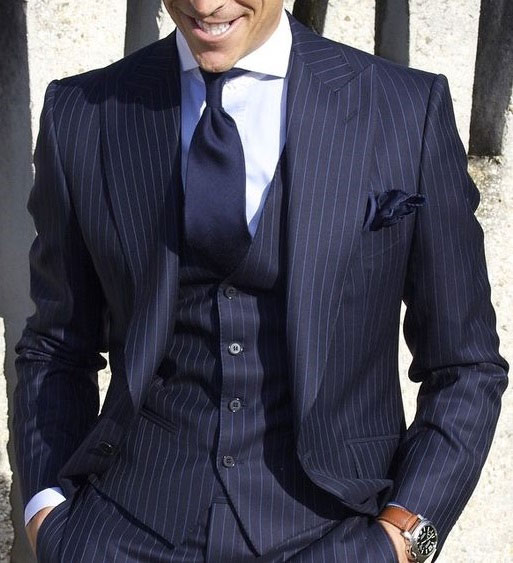 Custom
THE FINEST IN BESPOKE ATTIRE